Our big timer is two years old now! Time really does fly ~ I never believed it when people would tell me that once you have kids, time goes by so quickly, but it is very true. It seems like just yesterday he was a wee tiny baby, and now here he is, two!
I was also excited because I felt like this was the last birthday I really could plan out on my own lol. Is that terrible? I have so many ideas for kids parties ~ but I am sure Wyatt will have his own opinion on things like theme. This time though, I had fun with a cookies and milk theme.
When you look online, there are so many different ways to do this party, from elaborate to very simple. I went for a more simple version, I am kind of minimalist about things these days, but I am very happy with how it turned out! 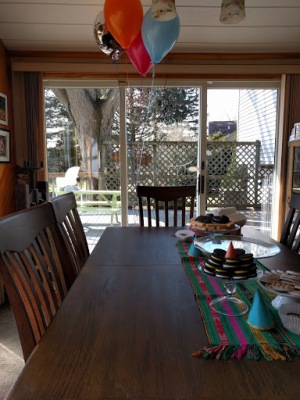 I bought a few dozen cookies, including whichever birthday cake flavored cookies were on the shelf, and had my husband put them on the cake stands provided by my stepmother. She has a million, thanks to an obsession with the Great British Bake Off. (one which I share!)

We had gone to Target the night before the party, and just picked up a few things. A few little decorative party hats, the cookies, festive birthday themed paper products, individual Horizon milks, flavored milk straws, and individual bags of Chips Ahoy, the latter two for the gift bags for the kids. I had decided I didn’t want to go too crazy with the milk and cookies theme, so I did a mixture of birthday with the cookies and milk, so it was more of a birthday party that included cookies and milk than a milk and cookies themed party, but everyone seemed to be happy about it, especially the kids. And seriously if you haven’t had a Birthday Cake Fudge Stripe cookie, I highly recommend them. And so does my two year old. 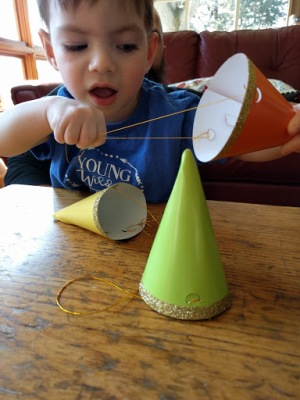 I let him play with that elastic for about one second, which resulted in some quickly dried tears. Better than an injury though! The treat bags all had those personalized mason cup jars, with blue and white straws, which I picked up on Etsy from the store Mason Jar Party. I just thought they were so cute, and such a good price! You get a personalized set of 10 for just $19.99, and they are even BPA free! I just loved them. 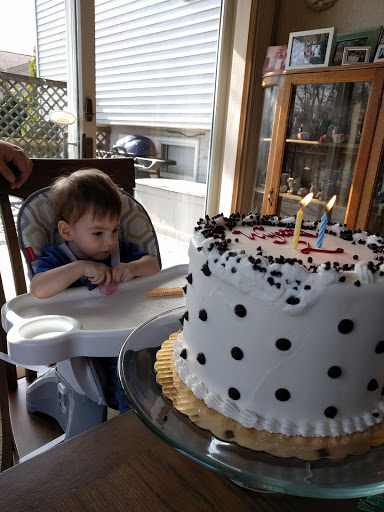 I love this photo, since the angle makes it look like the cake is ten times bigger than the boy. It was a huge cake, but not bigger than a toddler. Lol. It was seriously delicious. We ordered it from a nearby bakery, a real one, named Sorella’s, and they did a fantastic job. It was chocolate chip cookie themed, with chocolate chip batter, with Bavarian creme in between each layer. It was three layers of deliciousness! Bravo Sorella’s! I have to say, I contacted a few bakeries regarding a cake, and two I never heard back from one and one outright ignored me when I went into the actual bakery. Sorella’s not only did a fabulous job, they also provided the friendliest service ever. They worked really hard to give us what we wanted, and they succeeded. They have a customer for life now!
Everyone had such a good time ~ the kids had a blast playing with their milk mustaches that my mother in law made for them, and just being kids in general. They came up with the craziest pretend games, imagining themselves to be unicorns, complete with a “unicorn horn” on their heads, made from what they found around the house and blue painters tape from a drawer. I love when kids play like that! The adults relaxed for the most part, munching on cookies, cake, pizza, and bread sticks. (If you are ever in Tecumseh you need to get Basil Boy’s bread sticks!) Wyatt was completely tuckered out by the end of the party, having had such a good time with his family.
Which was exactly what I had wanted for him!

From This Side of the Pond

Navigating the ups and downs of parenting